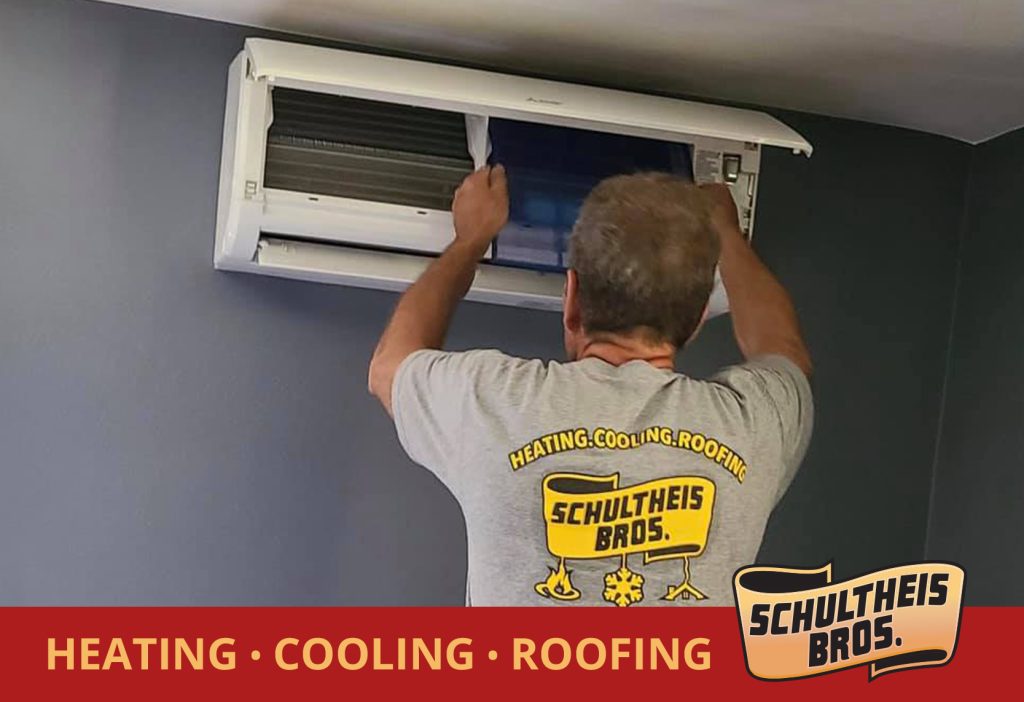 SAY WHAT! HEATING AND COOLING WITHOUT AIR DUCTS?

Are you in search of a more efficient, cost-saving and dependable heating and cooling solution for your home? Maybe you’re living in an older home, built before central comfort systems were the norm. Or perhaps you’re thinking about an addition to your house or finishing your basement.

No matter the reason, we’re going to talk about why you should consider ductless heating and cooling.

That’s right! If you think you need to install air ducts as a distribution system to experience efficient, effective heating and cooling in your home, think again. Mitsubishi® Ductless Heating and Cooling systems are excellent for an assortment of applications and their popularity continues to skyrocket.

What precisely do we mean by ductless? True to its name, a ductless system doesn’t involve widespread ductwork to move air throughout a home. Simply stated, a ductless system runs without the use of air ducts. Instead, they depend on a main compressor unit that’s mounted outside the home along with a series of indoor air handlers. Rather than employing a series of ducts, these air handlers are linked to the outdoor unit via a small conduit that extends through the walls.

Each indoor unit can be managed and adjusted to heat or cool a particular area. That’s because air is blown directly into a space instead of being moved through ductwork to reach its destination.

And since a ductless system is devised to transfer outside air to heat or cool a specific space in your home, your HVAC system is much easier to manage, service and maintain.

Ductless HVAC systems keep your home at a steady comfort level, deliver cleaner air and can cut your energy costs by as much as 50 percent. Plus, they are an efficient way to expand your comfort level, no matter the challenges your space presents.

Okay, you’re going to need to have your ductless system serviced at times. After all, what HVAC system doesn’t? In most instances, however, routine maintenance is no more than keeping indoor filters and outdoor coils clean and these tasks can normally be completed by the homeowner.

WHY SHOULD I CONSIDER A DUCTLESS HVAC SYSTEM?

Oh, about that new addition! Expanding your ducted system often includes lowering ceilings or otherwise taking away space. Ductless systems are the easy choice to do away with this step of construction when adding a new room. Rather than expanding the home’s current ductwork or pipes or adding inefficient electric heaters or portable air conditioners, opting for a ductless system can supply heating or cooling at a lesser operating cost.

That’s right, with a ductless system, you no longer have to depend on space-eating window air conditioning units for your summer cooling. Not only are these window units unattractive and underpowered, but they can also make your home less safe.

Bottom line: Ductless systems not only rid of bulky and difficult-to-install ducts, but they also deliver cost savings and flexibility that a traditional HVAC system simply cannot offer.

HVAC Fact: Did you know that ductless systems have been around the U.S. since the 1970s? It’s also a principal system employed throughout homes in Europe and Asia because of their efficiency.

HERE’S ONE OTHER PAYBACK WITH DUCTLESS HVAC SYSTEMS

Ducted systems can often take several weeks to install, they disrupt everyday life in the home and can take up precious space with their size.

Due to their simplicity, ductless systems provide easier, faster installation in nearly all homes. Let’s face it. It’s far simpler to fish a narrow bundle of insulated refrigerant lines throughout a house than to retrofit cumbersome HVAC ducts. No pricey or invasive ductwork is needed and there is only one small disruption to the property. The outdoor unit is positioned beside your home and small piping running to the indoor unit(s) involves no more than a three-inch hole in the wall.

Bear in mind, your Schultheis Brothers’ team is trained and highly experienced in the installation of Mitsubishi® ductless heating systems.

For instance, many homeowners prefer separate areas of their home to have different temperatures, a scheme identified as heating and cooling zones. Each of these zones will contain its own thermostat, so you only need to heat or cool the space when it’s occupied.

You can also maintain the rooms you mostly live in at specific temperatures for comfort. Keep the kitchen a bit cooler than the rest of the house or maintain the garage at a comfy temperature even in the winter. It’s your choice.

Even difficult-to-maintain rooms are easily managed with a multi-unit system. It bears repeating that each space has its own control unit. You can also better heat or cool spaces where a duct system just can’t reach or work quickly enough.

Moreover, these indoor units can be mounted on a wall, floor-mounted or installed as ceiling cassettes. Such wall units are offered in a variety of sizes best suited to how you use the room, as well as being provided in an assortment of colors to blend with your furnishings. Most indoor units have a profile of roughly seven inches deep and normally come with sleek, modern looking covers to fit nearly any interior décor.

Keep in mind, too, that ductless systems are not just for a single room. Depending on the model, the outdoor unit can deliver heat and cooling for up to eight different zones or rooms in your home.

You can even manage your home’s heating and cooling from the palm of your hand. Comfort is more than controlling the temperature. It’s being able to do it effortlessly. Wireless remote control is just another option allowing ductless systems to offer personal comfort from every angle.

Plus, for smartphone users, as the saying goes, “There’s an app for that.” In this case, the app gives you total control over your home’s heating and cooling no matter where you are.

One more thing – most ductless systems are intended to keep a room cool in temperatures up to 115 degrees F. and warm in temperatures as low as -15 degrees F. So, while your neighbors down the street might be sitting wrapped in blankets watching the Steelers play this winter, your living space will remain comfortable throughout the entire game and beyond.

Your Shultheis Brothers professional can help you determine the best location(s) for the indoor unit(s) based on your preference and the layout of your home.

I CAN BARELY HEAR IT!

Imagine someone whispering to you standing five feet away – that’s how quietly a ductless system operates. It’s heating and cooling that’s truly ultra-quiet.

DUCTLESS SYSTEMS CAN SAVE ON YOUR ENERGY BILLS

As we’ve described, in a conventional heating and cooling system, conditioned air is moved through your home via a system of ductwork, found throughout the home, including in the crawlspace, attic and walls.

Often, aluminum tape is applied to seal any seams in the ductwork, while insulation separates the ducting from areas such as in your attic. If this isn’t installed properly, however, there will be air leaks leading to an inefficiency, eventually costing you added dollars. The U.S. Department of Energy calculates that “duct losses account for more than 30 percent of energy consumption for space conditioning.”

Ductless systems are also much smaller, which means less power usage. In addition, the temperature-controlled air of a ductless system is delivered directly into a room instead of an entire home. This means you don’t have to heat or cool a room that isn’t occupied.

As a traditional heating and cooling system moves air from the outdoors through ductwork, it’s also deploying dirt, dust and dander into the home. This debris as well as pesky allergens can reduce your indoor air quality, increasing the risk of allergy symptoms and possibly leading to some serious health concerns for allergy sufferers.

Filters in ductwork are usually installed to catch this debris and allergens, but not always effectively. Moreover, if the filters become jammed up and not routinely switched out, less air will be able to move into the home.

Without adequate airflow, sooner or later, you’ll feel and smell the dust and allergens even more. Also, clogged filters cut the flow of conditioned air into your home, causing the system to struggle trying to heat and cool the home.

With a ductless system, there’s no risk of debris, allergens or other pollutants moving from the outside to the inside of your home.

Ductless systems not only save money, but they also lessen your home’s carbon footprint.

These systems employ up-to-the-minute improvements in chemical technology, slashing the would-be harmful effects on the environment. Most ductless systems utilize R410A refrigerant, known for its zero-ozone depletion capability, which simply means your system will have less impact on the environment.

FINAL QUESTION . . . DOES IT REALLY WORK AS ADVERTISED?

Absolutely! Single or multi-zone, heating and cooling or just cooling. Whatever your requirements, whatever you space, however you want to use it, a ductless system provides customizable solutions that are installed trouble-free, conserve energy, are quiet and environmentally friendly.

If you’re intrigued about the idea of ductless heating and cooling, simply contact the HVAC specialists at Schultheis Brothers. We’re an authorized contractor for Mitsubishi® Heating and Cooling ductless systems in the Pittsburgh region.